How long is too long New Zealand?

Yesterday was ANZAC Day and I took my kids to the Dawn Service at Auckland’s War Memorial Museum. It's become an annual trek for me.

I prepare the night before, pinning my father’s medals to the jersey I will wear in the morning, making sure they go on the right hand side. I pin a poppy to the left chest of my jersey and below that is pinned a Mururoa Nuclear Veterans Group badge.

I am proud of the service my father gave to his country. He was called upon in 1973 by then Prime Minister Norman Kirk and he, like his shipmates, answered that call. As a nation we were proud of them. Heading off to French Polynesia in the middle of winter to be New Zealand’s official on-site presence as France commenced another round of nuclear testing.

They were sent there to remind France that New Zealand and other South Pacific countries did not approve of what the French were doing. By sending our sailors there we forced the world’s spotlight to be shone on France and their nuclear testing at Mururoa.

That spotlight proved too bright and like startled bugs when a rotting log is lifted, the French government hastily retreated, taking their nuclear testing underground. We had won!

Our boys had shown the world the shameful and embarrassing, not to mention scandalous, actions of the French government and military on that little Pacific atoll. It was a victory for right and justice and became the foundation upon which our nuclear free stance has been built.

However in the ensuing years, as a nation, we have forgotten what happened in that fateful winter of 1973.

We attend ANZAC Day commemorations and we say “we will remember them”. But that is becoming simply lip service.

How can we stand there on ANZAC Day and repeat those words when we have forgotten a whole campaign?

But to neglect the Mururoa veterans as we have, does them a disservice.

It says to them that their service and sacrifice (and the ultimate sacrifice that many of their shipmates have made) was for nothing. 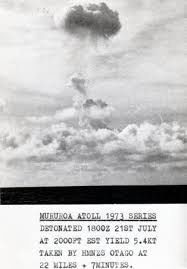 It says that their medals mean nothing to the country that have dished them out. The neglect in the annual ANZAC Day services turns those medals into little trinkets not worth the ribbon that they hang off.

They are the forgotten heroes. They’ve had to fight for everything they have got thus far and there are more battles yet to come.

Harsh words? Perhaps. But then these sailors are suffering and dying thanks to their service of their country. Health complications and cancers are common amongst these veterans and anecdotally, occur more regularly than the general population of their age.

During the annual get togethers their society organises, talk often turns to how the health of each veteran and their descendants is before the inevitable talk of who crossed the bar in the past year.

They suffer, we fail to remember or even acknowledge they exist. Norman Kirk promised those men that a grateful nation would remember them. Instead we have discarded them on the scrap heap of history.

It’s been forty-five years of neglect. How much longer will it take for us to get it right and properly acknowledge these heroes as we should?

----------------------
DISCLAIMER: I sit on the executive committee of the Mururoa Nuclear Veterans Group Inc as the co vice-president as well as the Media Officer. The group is made up of former sailors on the HMNZS Otago and Canterbury and the HMAS Supply, wives, partners and children of those sailors who served during the 1973 "tour". The group provides support and assistance to veterans and their families as well as continuing to ensure that the health of families and children (affected by the veterans service at Mururoa) are taken care of including generational testing to prove a link between nuclear exposure and illness.
Posted by Michael Bain at 23:11