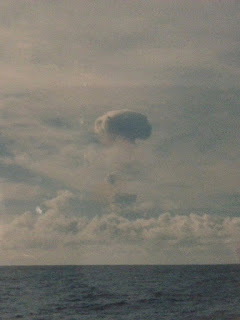 43 years ago today this was the view from on board HMNZS Otago. It was sent there officially to be a physical presence of the New Zealand protest against French nuclear testing on Mururoa Atoll. Prior to the Otago leaving, Prime Minister Norman Kirk said that its presence (and HMNZS Canterbury's when it relieved the Otago) would be "a silent accusing witness with the power to bring alive the conscience of the world".

Since then the men who went on Big Norm's Mystery Tour have been silently suffering and a nation whose proud anti-nuclear stance was built on the success of that 1973 protest has stayed silent in its appreciation and gratitude to those men who did their duty and served their country when called upon. Shame on us as a nation that we have forgotten these men who made the world aware of what the French were doing. Their mere presence meant that minutes after the nuclear test, word was sent to Wellington and then to the world of the detonation, sparking what former NZPA correspondent David Barber referred to as ‘a barrage of international protests that prompted New Zealand's Prime Minister Norman Kirk to say, "Never before has world opinion on nuclear testing been so stirred.”’ It was groundbreaking. One small nation in the South Pacific had boldly confronted another over nuclear testing and won. It was a major victory. 1973 was the last time the French undertook atmospheric nuclear testing.

Yet how many Kiwis know about what happened? How many of us are aware of the efforts of those brave men on board two of our Navy frigates? How many are aware that far too many of them have died in the following years of cancers and leukemias? How many of us know of the suffering that those sailors who are still alive have had to endure? Continual cancer treatment, often for rare forms of the disease. The psychological effects of watching your former shipmates dying and knowing the high probability that you could be the next one to contract cancer or leukemias. The effects on the wives, partners, children and now grandchildren as their husband / dad / granddad suffered.

This has got to end. New Zealand must acknowledge these national heroes and do the right thing by them. On the day of the Otago’s department, Norman Kirk said that a grateful nation would not forget the men and would look after them if something happened. Something did happen, and continues to happen to the sailors and men on board those frigates. It is time our nation stayed true to those words spoken by Mr Kirk 43 years ago. Lest we forget.

----------------------
DISCLAIMER: I sit on the executive committee of the Mururoa Nuclear Veterans Group Inc as the co vice-president as well as the Media Officer. The group is made up of former sailors on the HMNZS Otago and Canterbury and the HMAS Supply, wives, partners and children of those sailors who served on the 1973 Tour.
Posted by Michael Bain at 14:58